Canada Jays are year-round residents of the boreal forest that rely on cached food for survival during the winter. Amazingly, Canada Jays (formerly Gray Jays) also begin breeding in late winter when little fresh food is available so adults also rely almost exclusively on cached food for reproduction. Since 2009, Ryan Norris and his graduate students have been collaborating with Dan Strickland, former Chief Park Naturalist for Algonquin Park, on Canada Jay research in Algonquin Park. Dan began marking Canada Jays in Algonquin and tracking their reproductive success in the mid 1970’s. For the past two decades, the Algonquin population of Canada Jays has declined by over 50% and we are currently examining hypotheses for the causes of this decline, including how long-term changes in climate may be influencing the quality and quantity of cached food. More recently, we are collaborating with biologists in Denali National Park, Alaska to examine the ecology of Canada Jays at the northern edge of their range. We have also started studying a marked population of Canada Jays on Mount Washington, Vancouver Island.

Canada Jays begin building nests between mid-February and mid-March and females incubate eggs in sub-zero temperatures, often during severe snowstorms. What is remarkable is that females rely almost exclusively on cached food during this time because there is little fresh food available during the depths of winter. To top it off, males rarely feed females while they are  incubating, likely because they want to minimize activity around the nest so as not to attract predators. 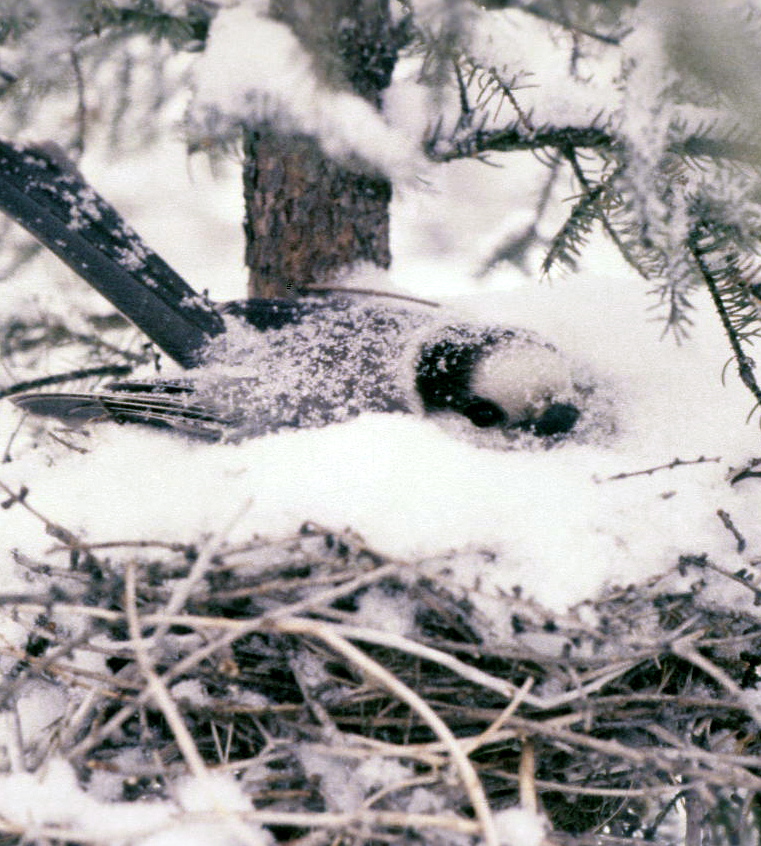 Canada Jay ‘volunteering’ to be weighed

Canada Jays can be extremely friendly and eager to take handouts (one of their nicknames is the “camp robber”). We take advantage of this behaviour to weigh females regularly prior to breeding, which helps us to determine female condition and to identify when females are about to begin incubating. A piece of cheese is placed on a weight scale and the band combination of the bird and the weight output from the screen is videotaped using a simple digital camera. Using this method, we recently showed that females increase their body mass by 25% in preparation for nesting, an amazing feat considering that most or all of their bulking up is done by retrieving food that was stored 6-7 months prior to breeding (click here to view Sechley et al. 2014 paper). Photo by Peter Wolf. 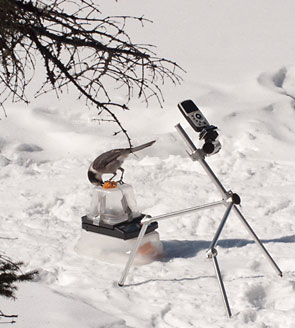 Canada Jays and the public

Canada Jays are very charismatic birds that will often land on your hand for food. Many people visit Algonquin in the winter to see this species and other boreal specialists that are at the southern edge of their range. During the course of our research in the Park, we often interact with the public and the public often helps us out by providing the location and identity of colour-banded birds. Here, Dan Strickland and Ryan Norris are banding a Canada Jay with a group of cross-country skiers in the background. Photo by Peter Wolf. 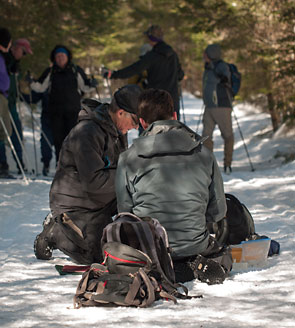 Every year, we find and monitor all of the Canada Jay nests within our study population. Once the nestlings are old enough, we access nests take measures and attach a unique combination of colour leg bands that helps us identify birds the following fall and winter when they are adults. The picture shows Dan Strickland ascending to a nest to put back nestlings after they have been banded. When nests are too high to access by ladder, we hire an arborist to climb the tree. The arborist lowers down the nestlings, they are processed on the ground, and then sent back up to be put safely in the nest. 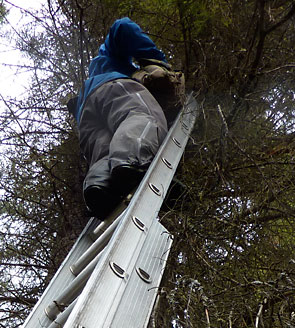