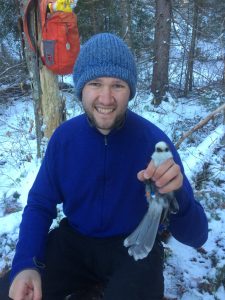 Natal dispersal is a vital life history trait that plays a major role in population dynamics and individual fitness. Among Canada (gray) jays, a resident, food-caching corvid, the movements and drivers of juvenile dispersal is entirely unknown. Within Algonquin Provincial Park, Canada jays have declined by over 50% in the past 20 years and the “food-rot” hypothesis has been suggested as a main cause. However, an alternative hypothesis to the cause of their decline is a lack of juvenile recruitment and high mortality during dispersal. For my PhD, I will be investigating the mechanisms behind juvenile dispersal using radio telemetry and demographic data of Canada jays. Primarily I will be assessing if non-random natal dispersal in Canada jays is driving range contraction through preferential movements towards more viable habitats for caching and breeding.

I completed my B.Sc. in fisheries and wildlife sciences at Paul Smith’s College located in upstate New York (2015). During my M.Sc. in marine science at Stony Brook University (2018), I studied the foraging ecology of herring gulls and how their movements can affect their microbiome and potential for heavy metal (Hg) contamination.