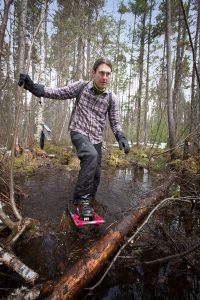 I’m an ecologist interested in the behaviour, population dynamics, and conservation of animals in seasonal environments, with a particular emphasis on migratory birds and butterflies. I obtained an MSc from York University in 2000, a PhD from Queen’s University in 2005 and was an NSERC-Killam Memorial Postdoctoral Fellow in the Department of Forest Sciences at the University of British Columbia from 2005-2006. I was appointed a faculty position in the Department of Integrative Biology at the University of Guelph in 2006, promoted to Associate Professor in 2010 and received a University Research Chair in 2012. In 2019, I began a cross-appointed position as the Weston Family Senior Scientist for the Nature Conservancy of Canada.

Research in my lab focuses on several theoretical and empirical problems related to the ecology & conservation of migratory animals and resident animals living in highly seasonal environments. In the field, I am currently conducting studies on the ecology & behaviour of Savannah sparrows on Kent Island, Bay of Fundy, NS, the ecology and population dynamics of Gray Jays in Algonquin Park, ON, and Denali National Park, Alaska and migratory ecology and behaviour of Tree swallows and Blackpoll warblers across their breeding range. See the Norris lab research page for details on these topics and more including our work on ecology and conservation of monarch butterflies and population ecology of fruit flies.

For a full list of papers and citations see: Ryan’s Google Scholar profile